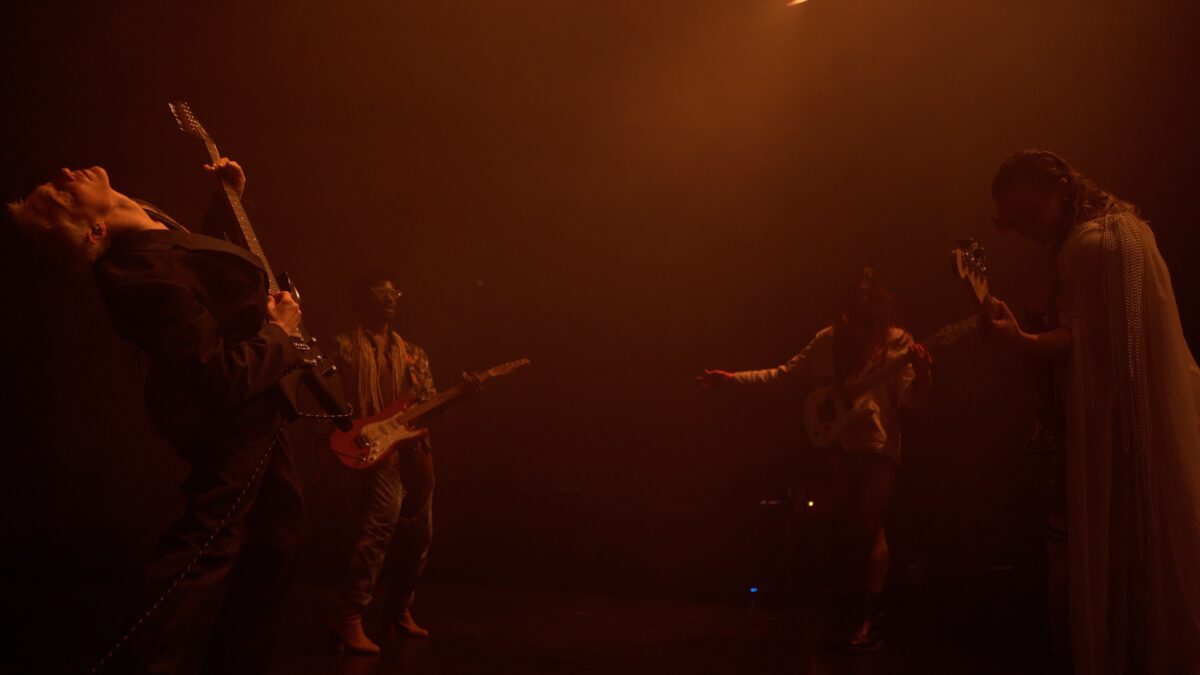 «DOOM is our offering of rhythms, textures, and ways of being-with, together. Even as apocalypses bloom around us, we dance non-stop and launch into a drone-metal concert, howling our approach to the end of the world — a collective grieving and celebration in the face of oncoming doom. We see, feel, and hear the slow changes of an ending world, and yet we propose a non-fatalistic way of attending to each other with care, imagining alternatives to the end-of-days scenario.» If the doomer, doomscrolling his apps for hours, imagines doom as the end times that are already vaguely here while everything goes to hell, DOOM does something like the opposite: doom, here, is transposed to being a place, too – an environment not only for cynically panicking about what’s next but also for sticking to a wide range of messy feelings attached to loss and grief. DOOM leaves space for not just the work, but also specifically the footwork of mourning to pop up – that at times might take the shape of a teetering dance and heavy breath from under a lace mask. At other times, it might be dull, repetitive, endlessly riding a bicycle in the figure of infinity. DOOM is also a place filled with fog machines: obviously. As you enter through the clouds, a world emerges in which remnants of a drone metal concert seem to overlap with silly cult-ish elements, cool moves from the rave, bondage scenes. Which sounds like a lot – and it is! – as in DOOM things can be a lot but they never just bet on an aesthetics of overpowering. The people who are there are given space to do their thing as they are moving through loss, as they’re clutching their pearls and pretending to play their guitars – anchoring everything in a sense of doom not as something judgmental and distant, but as something that could be or has to be lived through. And living through it also means to figure out how to do that somewhere in-between being alone and being together, personal and political — a mediation that is partly aesthetic. As Fred Moten said in The Black Outdoors, a conversation with Saidiya Hartman: «Anybody who thinks that they can understand how terrible the terror has been without understanding how beautiful the beauty has been against the grain of that terror is wrong.» The DOOM audience is invited to enter, move through the Grosse Halle as they wish, spending as much time as they need to feel immersed in the droning sound, non-stop dancing, and moments of respite, camouflaged against stacks of amplifiers and shimmering jewelry. DOOM should have celebrated its premiere in January 2021 at Tanztage in Sophiensaele in Berlin. However, the premiere could not take place due to a pandemic. After several postponements, a film version of DOOM was created, which will also be shown at BONE. The live performance of DOOM will have its world premiere in front of the audience at DE_HYBERNATION. DOOM opens this year’s festival on Friday 26.11.21 18:30-21:30 Text inspired by Maxi Wallenhorsts writing on DOOM – find the full text here: Suddenly You’re Pointing Everywhere and Everywhere Points Right Back.pdf

DOOM is a production by Layton Lachman/Samuel Hertz in co-production with Tanztage Berlin/ SOPHIENSÆLE. The 30th edition of Tanztage Berlin is a production of SOPHIENSÆLE, and is supported by the Senate Department for Culture and Europe. This production was also supported by the NATIONALES PERFORMANCE NETZ International Guest Performance Fund for Dance, which is funded by the Federal Government Commissioner for Culture and the Media. The project was additionally made possible with the generous support of DIS-TANZ-SOLO and Musikfonds e.V.

Caroline Neill Alexander (she/her)
received her BA degree in Theater, Dance, and Performance Studies from the University of California, Berkeley. For the past five years she has been living and working in Berlin, developing her own work as well as collaborating with other Berlin choreographers and T.E.N.T. Collective. In her own work, she deals with the space between person and persona and the blurred reality of reality. Caroline’s aesthetic is physical, technical, horrific, comedic, beautiful and grotesque and always incorporating voice and text. These ideas were explored in her latest solo works, Full Moonay, Sharterlla: House of Desperation, and The Oasis.

emeka ene (he/him)
is a performer born in London, raised in Berlin. He is lead guitarist and singer in the post-punk band Marriage and is currently undertaking a BA in Dance, Context and Choreography at HZT Berlin. His current interest is in cities, places and spaces, which he engages with through walking scores choreographed by celestial bodies.

Layton Lachman (they/them)
is a choreographer who creates performances rooted in somatics, channeling these experiential practices into immersive, sensorially complex worlds. Layton is committed to dance practice centered on group study and collective authorship — with the understanding that we are always collaborating with those who come before, after, and with us. After working in San Francisco alongside Abby Crain, Mara Poliak, Kathleen Hermesdorf, Sara Shelton Mann, and SALTA, Layton relocated to Berlin. For the past five years they have often been engaged with T.E.N.T. collective — creating experimental curatorial platforms — as well as developing their own choreographies. laytonlachman.com

Samuel Hertz (he/him)
is a composer/researcher specialising in sound and climate. Past performances on infrasound, acoustic ecology, and radiophonic lunar transmission have been presented in such venues as Palais de Tokyo (FR), Fylkingen (SE), Pioneer Works (US), Opera North (UK), and the National Science + Media Museum (UK). Hertz has authored nine essays on sound and environment, and his research currently happens within The School of Infinite Rehearsals/Onassis Future Initiative. samhertzsound.com